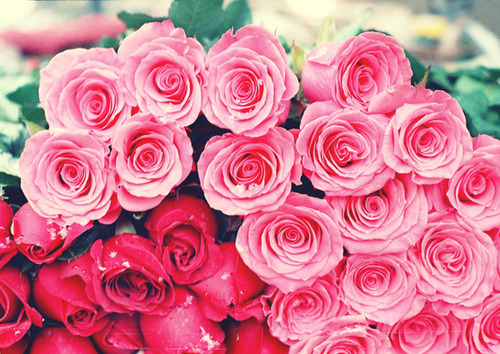 roses in the garden need rain.

The first person who sent River roses was James Heurton. "The first man who sends you roses should be the one who will love you forever." They were both sixteen, and he had buck teeth. She thought they added character, he never smiled. But he did his homework before giving them to her. She would've never accepted but there was something about how well kept they were. And that's when James let her know they were stolen from his mother's garden.

Ms. Heurton never liked River after that. They had paired up once again for a school project, literature or science, it was one of those. But she never wanted James to go to their home, there was no room to do anything and she shared her space with another family as her mother didn't really have the money to rent a proper home. They were tucked away in the corner of a living room like a secret. Teenage River would've never seen the day where she would've had a real house, with spacious rooms- that was just TV magic.

It's so funny what one forgets. Her mind blocked that part of her life, but she wasn't certain if it was out of shame or out of sadness for the life she struggled to lead at twelve years old. But the thing she did remember was how big James' house was, enough to fit a whole garden of roses there. And Mrs. Heurton's love of horticulture.

"Roses are among the easiest flowers to grow. They require little. They tolerate most soil and many conditions. It is because of, not despite, their availability they are so beloved."

River wandered through the rooms of her home, knowing that every room had a story to tell. There was Theo's place, loud and sometimes messy. He had a knack for calling a place his own and making it feel loved. Like everything and anything he touched was sunkissed into a beautiful impression of humility. She never met someone like him, so powerful with his words and bold with his choices. He was part of her home, and she would never let him go.

There were also her dogs who had been with her through too much, too soon. The pups were sitting on top of each other in their own cuddle puddle. She had already way too many photos on her phone of this ritual so, in proper millennial fashion, she grabbed her phone and snapped a few more. She noticed the roses Spencer got her on the table next to the dogs.

Flowers were a curious phenomenon, no single one is the same. When one takes a closer look, there is quite a difference in each petal. They have their own DNA, that separates each and every one of them from the other. Yet the only thing they truly had in common is that each is elegant, and still considered a rose.

Any one could offer a flower, the problem lies in whether or not that person being offered will take it. They could put it in their hair, they could throw it in the trash, or just accept it and make it theirs. A rose is universal. A rose in a funeral is empathy. A rose in a wedding is for happiness. A rose on the doorstep of someone River used to know is forgiveness, but she would never go that route. Not when there was too much to say and not enough time in 2020.

Someone once told her that her mother took her childhood away. She removed her from her comfort out of her own selfishness and put River into a car with a broken steering wheel. She always wondered if they were right, and her struggles with the English language sometimes played a part in her decision. She always looked at everything through that rose-tinted glasses that she bought for herself. But the roses didn't fuck around, they had their own language. And even if at that moment it meant to love, sometimes a rose just wasn't a rose. Flowers have a language, not just in purpose, but in care.

Who's to say her mother destroyed her life? Only she knew the answer to that